Stromness was built to no plan, but by some stroke of chance what emerged was, and remains beautiful. The houses on the upper side are built into the steep granite-studded hill; on the seaward side they are built on stone piers that jut out into the harbour water. Stromness is a ballad in stone which keeps its own legends and lore, most of them sea-salted.

Franklin's View is on Franklin's Road, which is named after the famous explorer, John Franklin. Franklin joined the navy at the age of 15. He took part in the great sea battle of Trafalgar, and was an Arctic explorer who mapped almost two thirds of the northern coastline of North America. In his last expedition, he disappeared while attempting to chart and navigate a section of the Northwest Passage in the Canadian Arctic.
Though HMS Erebus at 370 long, and HMS Terror at 340 long were sturdily built and were outfitted with recent inventions, both ships became icebound. Franklin's men tried to reach safety on foot but eventually succumbed to extreme cold.
Stromness was the final port of call for HMS Erebus and HMS Terror before their fateful last journey. 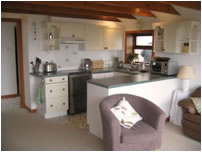 Franklin's View has a charming and cosy atmosphere befitting of a holiday cottage.

The open plan living and dining area has a bright and airy feel which is encouraged by the large panoramic windows, looking over the rooftops to the Harbour and Scapa Flow.

Franklin's View boasts its' own private and secluded garden with drying green and garden furniture (ideal for a BBQ or relaxing). 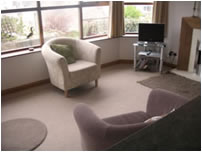 Franklin's View is heated throughout by controllable electric storage heaters. The living room also has a coal effect hearth which adds to the ambience.

The kitchen is well equipped with modern appliances including hob, oven, microwave, fridge/freezer and washing machine. There is comfortable seating for four at the dining table.

Franklin's View sleeps four people in two cosy bedrooms one of which is a double and the other a twin each with cupboards and hanging storage.

The bathroom has a fully tiled floor with a walk in shower.