There is magic in Orkney, but it is not the kind of magic that can be caught in holiday brochures. The essence of Orkney's magic is silence, loneliness, and the deep marvellous rhythms of sea and land, darkness and light.

Orkney and Shetland saw a significant influx of Norwegian settlers between 800AD and 1000AD. This was due to the overpopulation of Norway in comparison to the resources and arable land available there at the time. History once held that the Norwegians largely replaced the original population on the islands, the Picts. However contemporary DNA studies refute this, suggesting instead a slight majority of aboriginal Pictish genes.

During World War I and II, Orkney was the site of a Royal Navy base at Scapa Flow. After the Armistice in 1918, the German High Seas Fleet was transferred in its entirety to Scapa Flow while a decision was to be made on its future; however, the German sailors opened their sea-cocks and scuttled all the ships. Most ships were salvaged, but the remaining wrecks are now a favoured haunt of recreational divers.
One month into World War II, the Royal Navy battleship HMS Royal Oak was sunk by a German U-boat in Scapa Flow. As a result, barriers were built to close most of the access channels; these had the additional

advantage of creating causeways whereby travellers can go from island to island by road instead of being obliged to rely on boats. The causeways were constructed by Italian prisoners of war, who also constructed the beautiful Italian Chapel.

Orkney consists of approximately 70 islands, 19 of which are inhabited. The landscape of Orkney is green and rolling, treeless - with large skies and stunning sunsets. 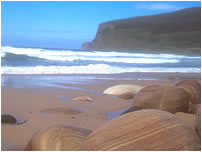 The Mainland of Orkney is filled with treasures - amazing stone built villages and monuments that have stayed for thousands of years. Sometimes not having much wood to build with is a good thing! Franklin's View in Stromness is an excellent base from which to explore Orkney, and Stromness is a beautiful distinctive town well worth enjoying your evenings in.

Orkney is famous for delicious produce - orkney milk, meat, cheese, ice cream, beer, bread and fudge are all highly recommended. Pubs and restaurants and evening entertainment is all close to hand. Come stay in Orkney with us and discover it's magic for yourself!

Things to see and do: